A Valentine's Day to Remember 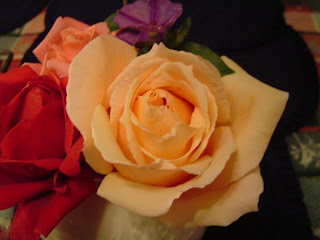 The following article was written by me and featured as the cover story in February issue of the Voice of the Village newspaper. It is my gift to you, my readers, on this Valentine's Day. - Bobbi

I have discovered one of the happiest jobs on the planet – Valentine’s Day Flower Delivery Person. It’s like Santa Claus with petals! Who doesn’t like getting flowers?... especially on Valentine’s Day.

How did I make this discovery? Well, I know someone, who knows someone, whose twin sister owns a flower shop. So of course, when I heard that they needed extra help for Valentine’s Day deliveries, I said, “Yes! That sounds like fun!”

First of all, most of the flowers we see in Los Angeles aren’t grown in the city. They are grown elsewhere and are then picked and packaged in such a way that they can survive the rugged treatment that they will meet on a trip which is sometimes half way around the world. They arrive at a district flower mart where they are sold to a local florist, put back on a truck and delivered to the shop. Now, these flowers have to be unpacked, trimmed and placed in water and refrigerated. (All this, by the way, is done standing up. I didn’t see one chair in the entire shop and no one ever seems to sit down.)

It is only at this point, that the flowers have a chance of making it into the hands of the (sound the trumpets, please) floral designers. The flowers get placed into individually designed arrangements, packaged to be shipped again, and then delivered to the recipient of all this hard work…. that special someone…. your Valentine! Wow!

Now, who wouldn’t want to deliver THAT present? How many people had to work how many hours to create this lovely gift?

Walking into an office or house with a huge (or small) Valentine’s bouquet in your hands is like walking in with The Crown Jewels. My entrance brings ooohs and aahs and admiration for the flowers and the lucky recipient who has someone in their lives who cares enough to present them with such a precious treasure.

My first delivery was a huge arrangement of long-stemmed roses from an “on-again-off-again” boyfriend. (This relationship condition was explained by the recipient to her admiring co-workers as she read the attached card.) Hopefully this large token of his affection bought him a bit of “on-againness.”

The next delivery was to the most important client…. the mother of the owner of the shop. She received (appropriately) the biggest and most beautiful arrangement of them all.

A very special moment occurred when I delivered flowers to someone in a beautiful, large house in an exclusive area of town. The stylish woman who opened the door was very nice, but indicated that she was not the recipient of the flowers but was only a friend staying “in this expensive world” while recovering from an illness. She said that my “Happy Valentine’s Day” greeting was the only one that she expected to get that day, but that when one has been sick, just finding out that the lab test results are “clean” was enough to make each day special. We mutually admired the blue sky and I went to my car and she went into the house. I had a few long stemmed roses in my back seat that I had taken to replace any that might get broken in transit. On impulse, I grabbed one of those roses and went back and rang the doorbell again. When she opened the door, I handed her the rose and said, “Happy Valentine’s Day.” She started to cry. I started to cry. We hugged. I’m glad that I did that… although technically, it was not my rose to give, I’m pretty sure that the wonderful owner of the shop I was working for, would have approved. I’m glad that I did it. It was important.

Moving along, I continued to dole out my Flower Claus gifts to the expecting and non-expecting. Eventually, there were only two arrangements left in my car. Both were going to health care facilities. The first one went to a woman in a nursing home. She was so old and frail that I don’t think that she even realized that the flowers were there. Walking the halls and seeing the elderly people in their wheel chairs, staring blankly at the walls, made me sad. It seemed like such a waste and a horrible way to end life.

Next was my final delivery. I found the hospital and parked in a no parking/delivery only zone (I always wanted to do that.) I made my way to the appropriate floor and door. As I entered the room, I realized that this was not just a Valentine’s Bouquet…. This was a “New Baby” Bouquet. All of a sudden, I was face to face with a brand new mommy, a brand new daddy and a brand new baby. What a twist of fate…. the circle of life within 10 minutes.

Feeling uplifted and hopeful, I returned to home base – the flower shop. Here, the store was still abuzz with late Valentine’s Day activity – husbands picking up flowers for their wives on their way home from work, last minute orders coming in by fax, the designers STILL going non-stop on making arrangements. The regular workers had hours to go, but my Flower Claus duties were done.

I took off my FTD florist apron and handed in my route sheets. I thanked everyone for allowing me to glimpse their world. I took a deep breath of the heady flower smell that I had gotten used to over the last few days and towing a huge Happy Valentine’s Day helium balloon behind me, I bid them all adieu.

My view of flowers, delivery people and Valentine’s Day had been changed forever. It was not just about the money or the work. Each flower, each bouquet, each arrangement is the end result of hours and days and weeks of labor and attention by many people, that have given of themselves, so that the colors and smells of fresh flowers could communicate to all who pass by the very important message that this world can and is beautiful… if you only stop and smell the roses.

A Valentine's Day to Remember by Bobbi Burger Brunoehler is licensed under a Creative Commons Attribution-Noncommercial-No Derivative Works 3.0 United States License.
Posted by Bobbi at 11:52 AM

Bobbi, It was a gift just to read of your adventures delivering flowers to such a variety of people. I worked in a shop many years ago and you are so right about what hard work it is.....and the product is PERISHABLE! So when it isn't a holday, these beauties of nature may or may not be sold before they expire. Yet another reason it is truly hard work. But what a product!

Promote Your Page Too

Life is one big balancing act

Check out these sites and blogs

Reach for your dreams